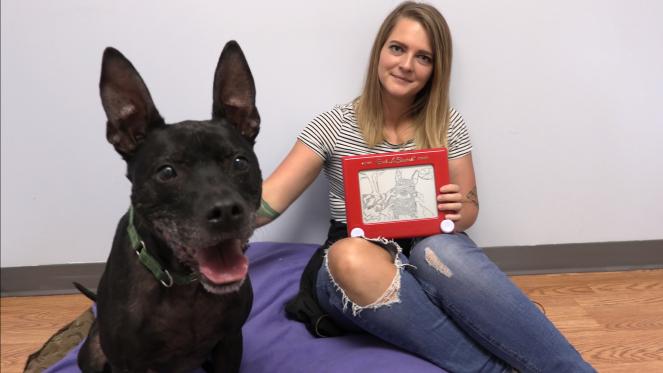 How an iconic drawing toy helped raise awareness for rescued dogs and cats in Salt Lake City
By: Nicole Hamilton on November 05, 2019

If you told Britt West when she was a child growing up in Salt Lake City that one day her Etch A Sketch would help save lives, she might not have believed you. But more than three decades later, after toting a tiny version of the classic drawing toy with her on a trip to the Grand Canyon, that’s what happened.

During a stop at Best Friends Animal Sanctuary along the way, Britt felt a wave of inspiration and wanted to do something to do preserve the memory of experiencing the Sanctuary for the first time. So, she pulled out her Etch A Sketch and drew the Best Friends logo.

She shared a photo of her Etch A Sketched logo on Instagram, making sure to tag Best Friends. The social media team loved it and asked if she’d be interested in using her artistic talents to help pets at the Best Friends Lifesaving Center in Salt Lake City find homes. The answer was a resounding yes.

“I was so grateful for the opportunity,” says Britt. “I have always enjoyed giving back through my art, and it was just a really good feeling knowing that I could use it help the animals.”

So how does one go about Etch A Sketching pets? As it turns out, it’s a bit of a process. First, the team at the center sent Britt photos of Rocky, a black pit bull terrier mix with wonderfully pointy ears, and beautiful ginger tabby cat named Clicquot. The photos helped her get a head start on sketches, and then she visited the center to meet her four-legged subjects.

Videographer Erin Fell was there to capture the artist and her Etch A Sketch at work for the video above. And here’s some good news: Both Rocky and Clicquot have been adopted.

Use your skills to help make a difference

While Britt enjoyed doodling on her Etch A Sketch when she was a child, it wasn’t until a friend gifted her one about 16 years ago that she really got into it. One day while waiting at a hospital for her sister to come out of a routine surgery, she sketched an octopus and then shared the sketch on her Facebook page. She received a ton of likes and words of encouragement to continue Etch A Sketching. By the time she visited the Sanctuary, she had perfected a process to preserve the sketches and was taking commissions from people who loved her art.

After being contacted by the center, she realized she could use her art to make a difference in the lives of homeless pets in her community. It’s something Britt is looking forward to doing more of in the future. “Using the skills you already have to help others just makes perfect sense,” she says.