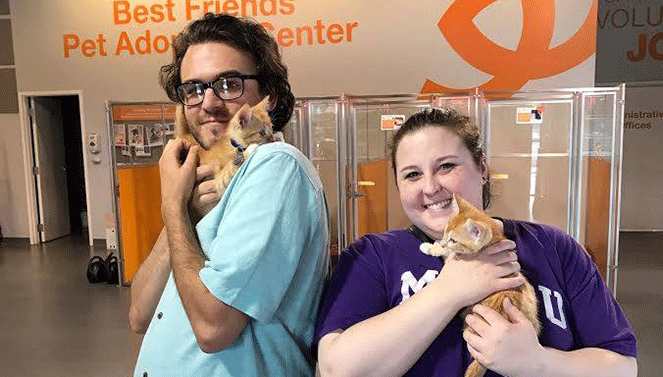 Fourth of July cat promotion helps save lives during a critical month.
July 19, 2017

Summer is in full swing in Salt Lake City. Temps are rising, and so are the numbers of kittens in area shelters. As Utah works hard to become a no-kill state by 2019, big work is being done to make sure that the kittens entering the shelters during the summer months (the height of kitten season) find the homes they deserve.

During May and June, we were able to find new homes for all the kittens arriving at the Best Friends Pet Adoption Center in Salt Lake City ― most of them coming from the Best Friends kitten nursery. But in early July, as the number of kittens outweighed the number of potential adopters, there would need to be a new plan to save the lives of Salt Lake City’s youngest and most vulnerable cats.

“This summer, with the July Fourth holiday looming, we faced a situation where we had more than 40 kittens coming into the adoption center in just one week,” says Kim McDaniel, communications manager for Best Friends in Utah. “We knew that the faster we found homes for kittens at the center, the faster we’d open more space for kittens to get the lifesaving care they need at the kitten nursery.”

The solution was the Independence Day promotion event that kicked off on the first day of July with $17.76 adoptions. And since that day fell on a Saturday, they also made it a “Caturday” event and offered the discounted fee on kittens too, for just that day.

“Boy did it work,” says Kim. “We did 36 kitten adoptions on that day alone. The center also kept its two-for-one promotion in place, so some folks got two kittens for just $17.76.” So, not only was the promotion a great way to celebrate our country’s freedom, but a chance to give cats and kittens a life free from the shelter.

Ready to adopt a cat or kitten? Our Pet Adoption Center has already filled back up! Also, check out the upcoming Cat Days of Summer adoption event , which will take place August 12 in the former JCrew space at The Gateway on the northwest corner of 100 South and Rio Grande Street.