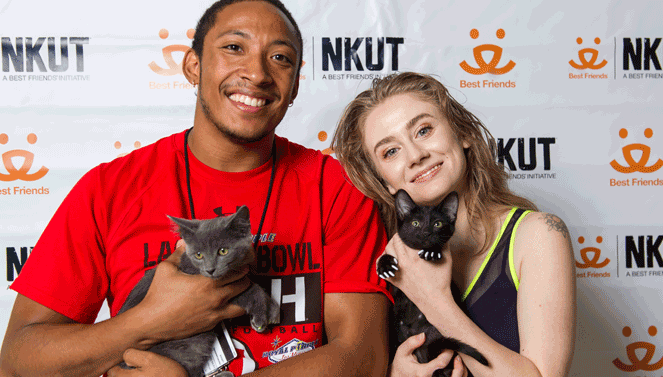 The recent Cool Cat Adoption Fest, sponsored by Best Friends and held at The Falls Event Center, was an occasion fit for a bride, where guests met adoptable cats under chandeliers, and got to know them better in a bridal suite that was transformed for the event into a meet and greet.

“It was an absolutely beautiful, unique place for an adoption event,” says Kim McDaniel, communications manager for Best Friends–Utah, who was completely surprised when the team at The Falls reached out to her and offered Best Friends complimentary use of the state-of-the-art space.

Solo, an orange tabby from West Valley Animal Shelter (WVAS), was the first cat to be adopted at the Cool Cat Adoption Fest. Turns out he had quite the admirer in Alisha, who had been looking for a cat to adopt and saw Solo on WVAS’s Facebook page.

Unable to make it out to WVAS, Alisha followed Solo’s whereabouts to the Cool Cat Adoption Fest and made sure to be there when the doors opened. Within minutes she spotted Solo, and after holding him for a few moments it was clear the attraction was mutual. No meet and greet was necessary. Solo and Alisha found their perfect match.

Solo’s adoption was one of many at the Cool Cat Adoption Fest. And by the end of the day, cats and kittens from every participating group had been adopted.

A great day for homeless cats and NKUT Coalition partners

“The event really gave cats a chance to shine,” says Lindsay Ortega of Nuzzles & Co. “Being in an air-conditioned space was a real benefit for the cats, who were very relaxed throughout the day.”

The coming together of so many diverse NKUT Coalition members who share in the same mission — to save homeless pets — was inspiring to Sandy Nelson, NKUT manager for Best Friends.

“Everyone helped each other out and was enormously supportive of one another,” says Sandy. “The event helped us raise awareness of the important work all of our partners are doing. And at the end of the day, I think some important bonds were made among the groups.”

This likely won’t be the last Cool Cat Adoption Fest because Best Friends–Utah is looking forward to more events at The Falls.

“We couldn’t have asked for a more amazing space,” says Kim. “And The Falls staff went out of their way to help. They made it easy for us to focus on what we were there to do — find homes for these deserving cats.”

Help Save Them All®. Donate to Best Friends.