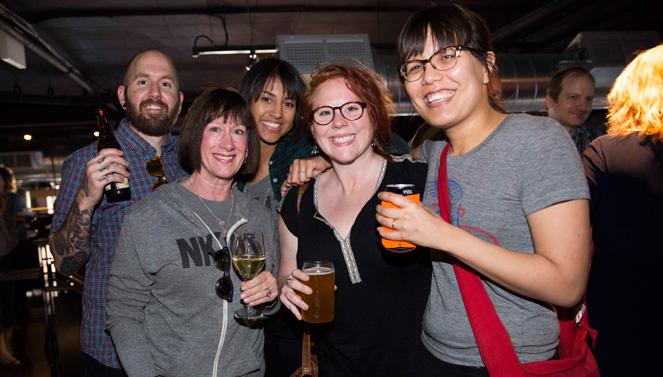 Best Friends celebrates pets and pet-lovers dedicated to saving them all.
By: Denise LeBeau on April 15, 2015

Late last summer, Santos, an adorable cream-colored Chihuahua, entered West Valley City Animal Services. When the little dog had difficulty finding an adoptive home, he was transferred to the Humane Society of Utah. It took Santos three months to find his forever home, but today he’s one of the thousands of animals enjoying life as a pampered pet — all because of the teamwork cultivated by No-Kill Utah.

The month of March marked the one-year anniversary of the kickoff of No-Kill Utah (NKUT), an initiative led by Best Friends Animal Society that brings together passionate individuals, city shelters, and other animal welfare organizations to end the killing of dogs and cats in shelters. West Valley City Animal Services and the Humane Society of Utah both are members of the NKUT Coalition. To help celebrate the milestone, Best Friends hosted a party on March 27 at the Wasatch Brew Pub in Sugar House.

Party with a purpose

“The anniversary celebration is our way of thanking the public for their support, and also a great time to provide an update on our progress toward no-kill during our first year,” says Kim McDaniel, Best Friends–Utah communications manager. “Wasatch Brew Pub generously donated the space and provided delicious appetizers.”

More than 150 people flocked to the party, where a large TV screen highlighted the behind-the-scenes work of NKUT. Wasatch Brew Pub also supplied a raffle prize —  a four-course dinner for 10. Meanwhile, NKUT T-shirts were flying off the shelves to everyone who donated $25 to Best Friends.

Nathan Meason, development officer, strategic programs for Best Friends, says, “The room was packed with passionate leaders in the animal welfare community and generous supporters of our mission.”

Sandy Nelson, NKUT manager, shared the good news of the 2014 NKUT annual report. “The progress we've made together over the past year has been incredible. Thanks to the NKUT Coalition's hard work and the community's dedicated support, we not only met our save rate goal for 2014 (the percentage of animals who enter the shelter and are not killed), we surpassed it. It's now at 77.4 percent — plus 27 communities in Utah are now considered no-kill.”

While the NKUT Coalition is entering its second year of saving lives, many of the groups had worked together previously in Best Friends’ No More Homeless Pets coalition, and the new NKUT version continues to put more resources and energy into the mission of “saving them all.” Tracy Kelley, NKUT Coalition manager, says, “In just this past year alone, we’ve added 14 new members to the NKUT Coalition, bringing it to 51 members strong, and counting.”

One NKUT Coalition member happy about the first year of NKUT is the Humane Society of Utah (HSU), the largest shelter in the state. Best Friends awarded a $10,000 Save Them All grant to HSU to help the organization save more cats. Because of the additional funding, HSU will be able to find more loving homes for cats and work toward elevating the current 82 percent save rate for felines.

Jamie Usry, director of development at HSU, says, “Everyone at our organization is elated about our record-setting numbers in 2014. Of the 10,481 pets placed in 2014, over 1,140 of those were transfers out to rescue group partners. We also transferred in 835 dogs and cats from other shelters in Utah alone.”

Among those transfers was Santos, the sweet dog who needed more time to find his happily-ever-after home. NKUT is dedicated to every dog and cat who needs a little more time or resources to get their second chance, and that’s something everyone can celebrate.