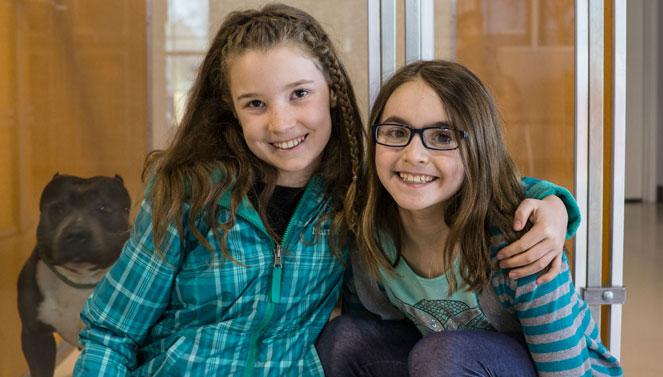 Madeleine Choir School makes the most of a week of fundraising for Best Friends–Utah.
By: Denise LeBeau on March 03, 2015

When two fourth graders at the Madeleine Choir School approached their principal, Jill Baillie, about raising money for pets in need, the timing was perfect. Hazel and Alexandra knew they wanted to help pets, but what they didn’t know was that National Catholic Schools Week was just around the corner.

Running from January 25-31, National Catholic Schools Week honors Catholic education across the country. Each year in order to celebrate the compassion of giving, Madeleine Choir School picks a charity and holds a fundraiser. “In the past, we’ve chosen people-based charities,” says Jill. “The children’s enthusiasm was so convincing that we decided to make pets the recipients of this year’s donations.” While Jill knew the kids were excited, what she didn’t know was just how popular helping animals would be for the whole school.

Since the kids didn’t have an organization in mind, Jill did some research on various Salt Lake City area groups and found a great fit with Best Friends Animal Society–Utah. The donations would go a long way toward whatever animal issue was nearest and dearest to each child’s heart. In addition to donations of money, the school also collected toys and pet food. And because they were also helping people in a very real way, it was truly win-win for everyone.

The kids got a terrific plan in place and all their hard work was worth it. “The entire school embraced this fundraiser,” says Jill. “Each day during morning assembly we promoted the fundraiser and the kids ran with it.” The kids also got creative with marketing. The made festive signs promoting the fundraiser that were strategically placed throughout the school. Toys and pet food poured in, and so did donations. And to add some friendly competition that would help the animals even further, Hazel, Alexandra and Jill promised a pancake breakfast for the class that collected the most money and items.

After 10 days of collecting money, toys and pet food, the fundraiser came to a close and everyone was excited with the eye-opening results. “When I authorized the children’s plans for this fundraiser to help homeless pets, I didn’t know how it would go,” says Jill. “We had never raised money for animals before, but this was our best fundraiser ever.”

On Valentine’s Day, Hazel and Alexandra presented a check for $1,924.05, two boxes of pet food and one box of toys to the Best Friends Pet Adoption Center in Sugar House. “I hadn’t thought about helping pets before,” says Jill. “We look for organizations that support social justice or for organizations that empower the marginalized.  This particular fundraiser supported animals. It makes sense why it was so popular, because everyone loves their pets."

Spencer Conover, Best Friends–Utah adoptions supervisor, received the donation at the center and was stunned. "It's really amazing to me to see people in our community so willing to help homeless pets through monetary and in-kind donations. But when you see such a generous act from a group of children like this, it really makes me feel special about our organization,” says Spencer. “The kindness, dedication and generosity of not only Alexandra and Hazel but, everyone at the school who helped with this fundraiser, proves to me that our mission is in good hands for generations to come.”

Find out ways you can help Best Friends-Utah at http://utah.bestfriends.org/get-involved/donate