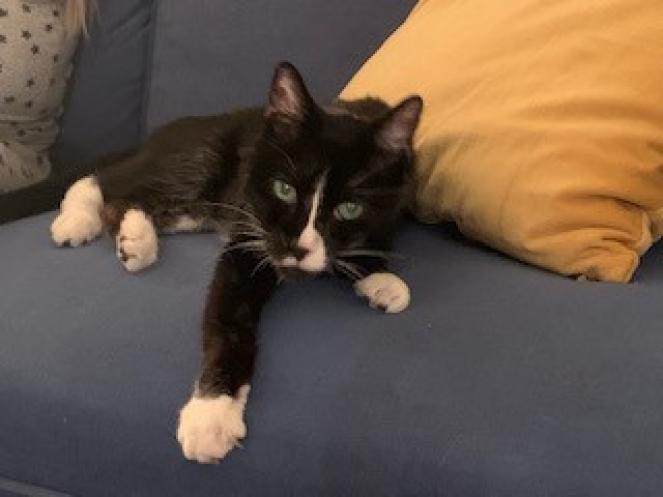 A 17-year-old cat struggled with health issues, but after time in a foster home he was adopted by someone who helps others feel better every day
By: Tracy Blowers on March 11, 2021

We’ll cut right to the chase: When Mister Meows arrived at Best Friends in Utah, he didn’t look so good. The 17-year-old cat had done a lot of living and it showed. Not only was he extremely underweight, but he had a terrible upper respiratory infection (URI).

Mister Meows needed two things stat: medical attention for his URI and a foster home where he could rest to his heart’s (and lungs’) content. After Best Friends veterinarians treated his URI, he went on to a foster home with Emily Sahsah, a Best Friends adoption specialist, and her husband, Amine, to let the TLC begin.

To help Mister Meows feel comfortable, they designated their entire spare bedroom as his own. That’s where they also nursed him to better health with fluids and anything else he needed. Soon, Mister Meows turned the corner and started to feel better. And he looked like a million bucks, too.

Eventually, Emily felt confident that he would get along with their pets and slowly introduced him to their three cats and giant dog. “It was fun to watch how he grew to care about our other cats and dog,” says Emily. “As long as Mister Meows got his own food and some cuddles from us, he seemed very happy and content.”

As Mister Meows continued to feel comfortable in his foster home, he started to explore and show a silly side of his personality. He found all kinds of places to take naps, including the bathroom floor. “We would place blankets on the bathroom floor, but he would still sleep on the cold tile. Finally, we put two towels down and he slept on the towels,” says Emily.

Mister Meows also managed to find his perfect spot in a corner in their little dining room, where they provided a heating pad for him and a nice warm blanket.

Mister Meows never wanted to be too far from Emily and Amine. In fact, she says, he even tried to get into the shower with her a couple of times. “The first time I experienced this with Mister Meows, it was such a surprise. I screamed for my husband. He came running, thinking I fell or something horrible happened. But no, it was just Mr. Meows trying to join her in the shower.

At night, Mister Meows would snuggle between them, and if they were watching TV or working from home, he was right next to them.

At first, Emily thought Mister Meows would be living the rest of his golden years with them. Not everyone wants to adopt a 17-year old cat. But after a few weeks, something amazing happened: People started asking about him. Within a few more days, they had a potential adopter, Patti Sharp, who also happens to be a medical assistant. And as soon as Emily met Patti, she knew Mister Meows would be in good hands.

Love brings cat back from the brink

Mister Meows has come such a long way from when he first arrived at Best Friends. “Mister has adjusted very easily,” says Patti. “The first night that I brought him home, he walked out of the carrier, did a little looking around the house and has been fine ever since. He acts like he has been here his whole life.”

Mister's favorite things to do are eat, sleep, and cuddle. “He tries to sit on my laptop while I am doing homework. He's a very lovable guy and likes to be wherever you happen to be in the house,” says Patti.

One of her favorite things when she gets home from work and sits down on the couch is to when Mister climbs up on her lap and bumps her chin with his head. “It feels like he is saying hello, and he missed me,” she says.

You could say Mister Meows is 17 years young. “Seniors need just as much love and attention as puppies or kittens. And they have a lot of love to give back,” says Patti. “He seems to be living his best life. Kind of reminds me to do that same thing, you know?”

Adopt a pet from your local shelter and show her that the best years are yet to come.

Not all cats who wander are lost

A big new world for a nearly blind kitten