A boy, a broken heart and a very good kitten 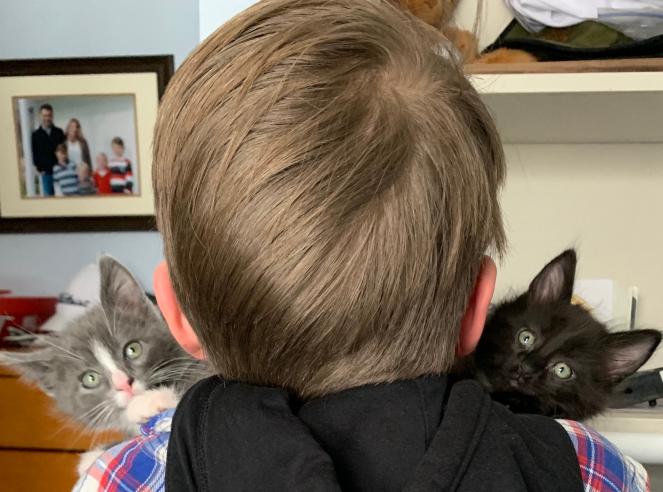 Family finds healing by fostering three kittens and gets a little help from a 13-year-old pet foster extraordinaire
By: Lindsay Hutton on March 19, 2021

In the fall of 2019, the Sweeneys adopted Oscar, a tiny black kitten. He was chosen by their daughter, her reward for overcoming obstacles at school. But it was Lucas, their 12-year-old son, with whom Oscar developed a close relationship.

When Lucas came home from school, he hung out with his kitten, who he nicknamed VGK (Very Good Kitten). Each night, VGK slept in Lucas’ bed. For VGK, Lucas created a special voice with a goofy, exaggerated accent in which he would say, “Oh very good kitten! You are so good!”

VGK always recognized the voice as Lucas, and would come running when he heard it. The voice cracked up the family because it sounded so unlike Lucas and was such a charming sign of affection for the kitten.

It was a happy surprise, just like Lucas’ love for VGK, the first cat in an up-to-that-point dog-oriented family. But when VGK passed away unexpectedly last fall, Lucas’ special kitten voice disappeared and the whole family felt its absence and his grief. He woke at night crying and couldn’t talk about VGK without bursting into tears. “Our hearts were broken for him,” says his mom, Laurie Sweeney.

That same fall, the pandemic brought what felt like a revolving door of quarantine orders. The Sweeneys have six kids and it seemed like one of them was always being asked to quarantine for two weeks because of exposure to COVID-19 at school. When Lucas had to quarantine, Laurie was ready with a plan to help him handle the boredom of being stuck at home with online classwork. She’d been thinking of the perfect project for him, one that she hoped would help heal his heart.

Laurie decided to sign them up with Best Friends as kitten fosters. While Lucas had never asked for another cat (all he could think about was VGK), Laurie felt enough time had passed and she knew that he was happier when he had a cat to love.

When she told him about fostering, he was excited, but she could see his reserve, as if he was a bit unsure about how it would feel to open himself up after such a loss. When Best Friends called the next day with three kittens ready to go, Lucas was giddy, wondering what the kittens would look like and if there would be a black one like VGK. Laurie hoped so.

Fate and friendship lead to a new start for injured kittens

Kittens to mend a broken heart

When Laurie and Lucas went to pick up the kittens, Melissa Martinez (a Best Friends lifesaving and care specialist), observed Lucas while she was going over necessary information and supplies. As he sat in the back of the waiting SUV near the open tailgate, she thought he looked sad. But then she brought out the three kittens, all with Halloween names — Walter Werewolf, Manfred Mummy and Vincent Vampire — and “his whole countenance brightened immediately,” says Melissa. “He got this grin from ear to ear.”

Lucas could hardly wait to take the kittens out of the crate. Once home, he couldn’t stop looking in on them, couldn’t stop giggling and couldn’t stop thanking his parents. And one of the kittens, Walter Werewolf, was black, cuddly and funny. It’s no surprise he won Lucas’ heart.

Lucas wanted to know: If they adopted him, would they be able to keep fostering? Laurie said they could. “Oh, I love the black kitten!” he would say in his special kitten voice. “It was like he was sent from VGK,” says Laurie.

So, the kitten stayed and got a new name: Romeo. The day Romeo was neutered was the one day that Lucas had to be without him, and it was the longest day. As the hours dragged on, he constantly asked when they could go get Romeo, not wanting to be without him.

Today Romeo sleeps with Lucas every night and cuddles with Laurie during her Zoom classes. He plays fetch and while he’s also playful and feisty, he still loves to be scooped up and held by any member of the family.

He presides over family card games from the hearth, where he soaks up heat from the fireplace. Large, in charge and a lovebug, he communicates with a funny noise that Laurie doesn’t know if she can even call a meow. It seems that Romeo, like Lucas, has a special voice for loved ones. And he recognizes Lucas’ voice and knows when he comes into the house, going immediately to him when he enters a room ― just like VGK.

Not all cats who wander are lost

Teen is a natural at pet fostering

Lucas took the work of fostering seriously. It was a team project — Lucas and Laurie’s — and he was very involved. The kittens stayed in his room and he was the one who noticed their personality quirks and when they got sick. He gave the kittens medicine when they had diarrhea, came to all their appointments and was the one who communicated about them with the team at Best Friends.

When Lucas noticed that Romeo, who almost never meows, sat up in his lap one night and meowed repeatedly before throwing up, he asked Laurie to call and let Melissa and the team know what had happened. It was an indicator of how acute his attention is and how much he cares about the health of the kittens.

Under his care, the kittens gained weight just like they were supposed to. They stayed healthy, and they all got adopted. When the word came that Lucas wanted to foster more kittens, Melissa and the staff totally approved. Lucas could definitely foster more kittens.

As of this writing, Lucas and the Sweeneys have fostered three more kittens. They are ready for their next set of charges. Fostering is now a family affair, with everyone (save the Sweeney’s 18-year-old son who is mildly allergic to cats) enjoying kitten-cuddling in the evenings. And everyone is heartened by the return of Lucas’s special kitten voice.

Remedy for a broken heart? Foster a pet

Fostering kittens gave Lucas more than just a project during quarantine. It also helped him overcome the loss of VGK. Fostering brought some light back into the Sweeney home after the passing of their beloved pet, and it helped them move forward by allowing them to help other kittens. “There’s all these little souls who need a place to go, a place to be taken care of, paid attention to,” says Melissa.

People stepping in to help by fostering lightens the load on everyone in the community. It can educate people on what it’s like to have a kitten (or cat, or a dog) teach us empathy, and it’s sometimes a way to mend a broken heart.

You can help pets, too

Foster, volunteer or adopt a pet from your local shelter and help save lives.

Adopt pet where you live