A lot of love and a little patience help an injured, scared kitten 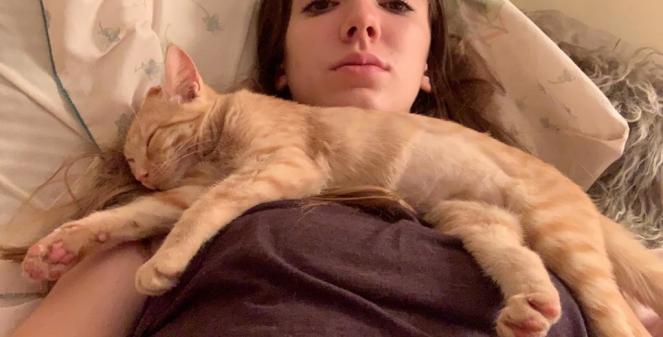 Olivier was injured and scared when she arrived at Best Friends, but after getting medical care and spending time in a foster home, she’s now one confident cat
By: Ashley Hart on January 06, 2021

You may have heard about the “socialization window” for kittens and puppies, an important period for social development. But after that window closes, it's more difficult to successfully expose and socialize kittens and puppies to new people and new places. What should you do if you find an injured kitten nearing the end of that socialization window? That’s a question young Olivier helped us answer.

She was just three months old with a fractured leg when she ended up at a shelter in Utah. The tiny kitten not only needed medical care, but she was terrified of the shelter’s unfamiliar sights and smells. But not to worry because she wasn’t there very long. After the team at Best Friends in Utah heard about her, she was soon on her way across town.

An examination by the Best Friends medical team revealed the leg fracture, which eventually would require surgery to help get her back up and running. Until then, they would keep her comfortable while they worked to find her a foster home.

While she was waiting and healing, Olivier caught the attention of volunteer Cathy Gray, who began spending a few extra minutes with her whenever she could. She started by simply putting her hand next to the little kitten while she talked to her. This slow acclimation process can help unsocialized kittens build trust in humans. And it worked. After doing this for a couple of days, Cathy was able to start gently petting Olivier.

Survivor cat Poppy has a knack for helping foster other cats

When another volunteer, Katherine Lapp, learned about Olivier, she took her home to foster her. “I had grown up with a shy kitten who loved our family very much but needed extra socializing with strangers,” she says, “so I was looking forward to putting those skills to the test on my own with Olivier.”

When she first arrived at Katherine’s home, Olivier slinked against the walls and hid behind the dresser. “I tried to coax her with toys and treats but she didn't have any interest in them,” says Katherine. “I decided to bring out my guitar and play and sing next to her, and she dozed off. When I stopped and moved, however, she hissed at me. She would spend the next few days hissing at me frequently.”

Despite the hissing, Katherine was determined to help her come around. She spent a lot of time in Olivier’s space, held her hand out to smell, and simply sat nearby to get her used to having a human around. It took time, but the effort paid off.

Then one day while Olivier was hiding in a box, Katherine reached in to give her a piece of turkey. At first Olivier hissed, but then she relaxed and Katherine slowly began to pet her. “I didn't take my hand away until she fell asleep,” she says. “It wasn't always smooth sailing, but we were friends after that.”

It wasn’t long before Olivier started to come out of her shell. She soon discovered the joys of sleeping on top of or next to a warm human. Katherine knew all along that the only thing Olivier wanted was to feel safe and loved.

“It's almost like you could see it in her eyes, too,” says Katherine. “She had a gentle soul that was hurting and needed time, patience and lots of love.”

And how’s this for great news? The patience and love Olivier received from Cathy and Katherine helped her so much that it didn’t take long for her to be adopted. Today she is loving life (often from the lap of her adopter) and thriving in her new home.

Be a kitten hero

No cape, no problem. You can still be a (super)hero for cats by fostering or adopting from your local shelter.

Foster a cat near you

The shy (dog) leading the shy

Despite her difficult past, this dog is kind to everyone she meets

Cat brings joy during the lonely days of 2020