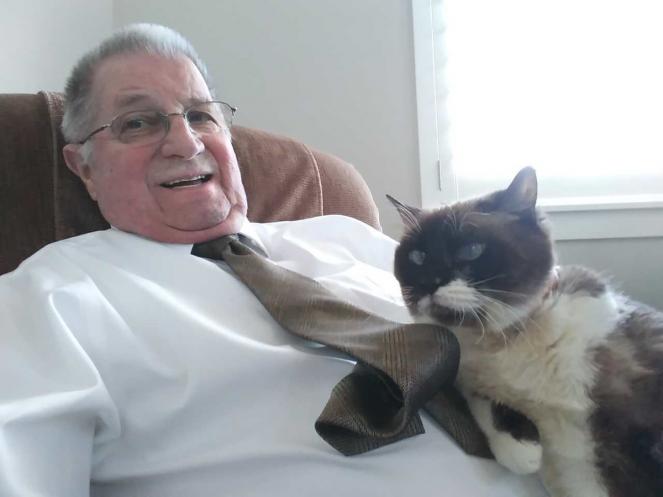 A 13-year-old cat named Valerie, found seriously wounded inside a box in a parking lot, is thriving in a home with her senior adopter
By: Nicole Hamilton on July 17, 2020

Things may be a bit scary and uncertain now, but they won’t be that way forever. On days when you feel hope waning, just think of Valerie, a beautiful cat of a certain age who was badly injured and found inside a cardboard box in a parking lot.

It took Valerie a year to heal from her injuries and learn how to relax and trust in a world she was fearful of. But with help from people who knew the best was yet to come, the senior cat began to thrive. Today, she lives in a big house with a senior adopter who loves her dearly.

Working together to save a life

When the team at the Best Friends Lifesaving Center in Salt Lake City found Valerie, she had a wound on her neck the size of a small hand, plus other smaller wounds. Since all pets at the center come from area shelters, the team contacted Salt Lake City Animal Services (SLCoAS) about Valerie and arranged for her to be taken there for emergency medical treatment.

At first everyone thought that she likely was injured due to an accident or maybe mistreatment by a person. But it soon became clear that her wounds were self-inflicted. Valerie had what’s called idiopathic ulcerative dermatitis, a rare skin allergy that causes self-induced lesions.

SLCoAS and Best Friends collaborated to bring Valerie to the Best Friends Kitten Care Center, where she could get around-the-clock care. Because she was so sick and weak from not eating on her own, she also needed a feeding tube.

Valerie’s wounds started to heal and eventually she became strong enough to eat on her own. A short time later, she was able to stand, walk and start to show glimmers of her personality. Valerie’s a fighter, for sure, but she’s also smart, independent and demanding in the best of ways.

Fostering makes it all better

Healing journeys are rarely smooth and in Valerie’s case they were marked both by some very good days and some rough ones. While she made it through the most critical and difficult part of her recovery, it would take months before she could manage the desire to scratch and bite herself.

As soon as she was healthy enough, Valerie began spending time away from the center, in foster homes where she could relax enough to stop biting and scratching. The love Valerie received from her foster families worked wonders. Soon, she was ready for adoption.

Because Valerie prefers the company of people over cats, the center team made her the official office cat. “She basically took over the place and won our hearts,” says Jaclyn Martin, lifesaving and care specialist, who became one of Valerie’s biggest champions.

In the office, Valerie ran a tight ship. But the team didn’t mind, because the sassier she was, the better she likely felt. Says Jaclyn: “She knows how to put you in your place and tell you no when she doesn't agree to whatever you are trying to make her do — like get off your lap.”

Jaclyn also notes that Valerie is a stickler for punctuality and requires that others be the same. “When it comes to breakfast and dinnertime, she will meow at you until you fulfill her needs,” she says.

A senior in search of a senior cat

The team knew it would take longer (than most cats at the center) for Valerie to find a home. Although she wears a special collar to deter her from scratching, it was important that she have an attentive adopter who could watch her closely.

At 82-years-young, BJ was looking to share his big home with a senior cat. Seeing Valerie’s baby blues during an online search for adoptable pets really grabbed his attention.

As he read about her past and how she was found in a cardboard box, he knew he wanted to meet her. And after talking to the team and learning about the daily regimen required to keep her healthy (medication and a special diet), BJ felt confident he could give her a good home and the adoption was on.

From cardboard box to a warm, safe home

Valerie meowed throughout the 20-minute trip from the center to her new home. “I just put my hand on the carrier while I drove to let her know it was OK,” says BJ. When they arrived, he placed her carrier on the floor in the hallway and opened the door. “I told her the house was hers,” he says.

Then Valerie took off up the stairs, paused at the landing and peered down at BJ, who was busy arranging her food bowls and setting up her litter box. It wasn’t long before she started checking out her new home.

Eventually, she mustered the courage to sit on BJ’s lap. Since then, it’s become her favorite place besides BJ’s bed or, more specifically, the middle of the bed and underneath the covers. That’s where she spends the day until she hears BJ come in after a long day of work. Then she’ll come out to spend time with him.

“I knew she needed a quiet, loving home, and that’s what I’m trying to give her,” says BJ. “And I think she’s comfortable here.”

BJ sends Valerie updates to the center team, as well as any questions he has about helping her stay healthy. “They’ve been really good to me,” he says.

As for the team members, they love hearing all about Valerie. “It was bittersweet sending her off with her new dad,” says Jaclyn. “But we are all over the moon that our sassy, blue-eyed lady found her forever home.”