Adopt or Foster a Heartworm Pup 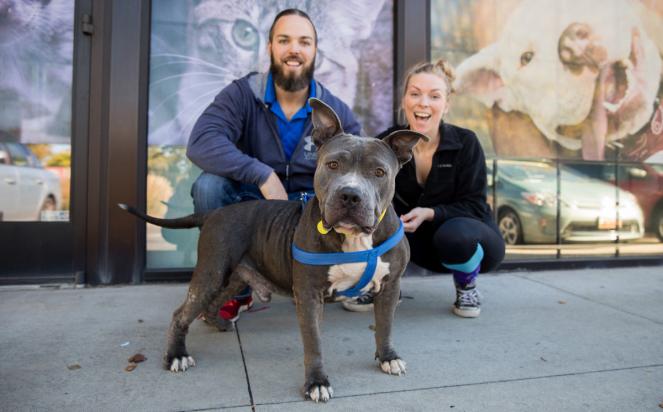 It’s not always easy dealing with a health problem, especially when you’re in a new place. Frankie, a four-year-old pit bull mix, knew this all too well. He had just been relocated from Texas to Utah, and on top of it all, he tested positive for heartworm.

Heartworm is a disease that can be found in every state in the country, but it’s especially prevalent in the southern U.S. Transmitted by mosquitoes, it is caused by a parasitic worm that inhabits the heart, lungs and associated major vessels, and it can cause considerable damage. If left untreated, the disease can be fatal. Early detection is key to treating the disease successfully.

The most common signs of heartworm in dogs are coughing, exercise intolerance (or getting tired easily with exertion), fainting episodes, decreased appetite and weight loss. Many dogs, however, show no signs at all early on. Later in the infection process, heart failure can occur.

Luckily, heartworm is treatable in dogs like Frankie, but it was important to get Frankie the help he needed as soon as possible. That’s when Best Friends came to the rescue, but just like all dogs undergoing treatment for heartworm, he needed more than just antibiotics.

During his treatment, Frankie’s activity had to be closely monitored and restricted. That meant leash walks only and relaxing in a kennel or crate at all other times. Sedatives are sometimes used to help keep dogs calm while undergoing treatment, to prevent complications. Frankie was no exception. He needed some extra-special care, including a calm space where he could heal, and someone to keep an eye on him. He needed a home, even if it was just temporary.

Despite his condition and the stress of adapting to a new place, Frankie demonstrated that he has his own superpower: He’s the biggest love-bug of all time. With an endless supply of charisma, he has the ability to charm the socks off just about anyone. That was the case with his new foster family, who had come to Best Friends planning to foster a puppy. Once they met Frankie, though, their plans changed immediately. And before he could make it to Best Friends’ next super adoption event, he had convinced his foster family to adopt him (no surprise there). Honestly, who could resist a face like Frankie’s?

April is Heartworm Awareness Month, and more and more dogs are being transported to the Best Friends Lifesaving Center to get the treatment they need to recover from heartworm. And just like Frankie, each one needs some time, space, love and care to heal. That’s why throughout the month of April, it’s free to adopt any dog who has tested positive for heartworm. Heartworm is just temporary, but a love like Frankie’s is forever.

Find out how you can adopt or foster a heartworm-positive pup.