Putting a Persian cat on the road to recovery 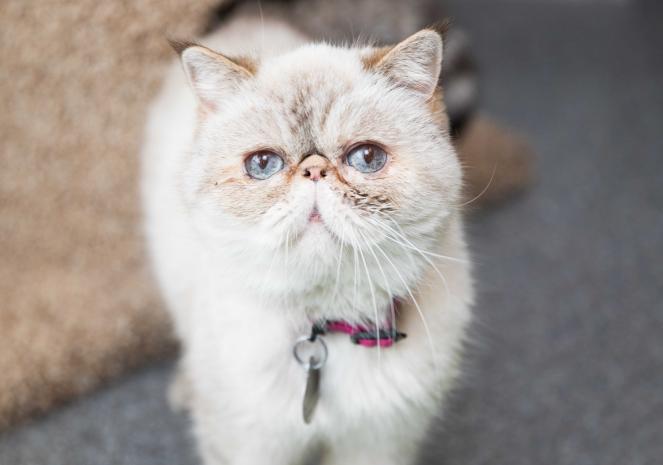 After receiving help from Best Friends in Utah, Posh Spice not only felt better, but she also caught the eye of an adopter in Canada.
By: Nicole Hamilton on February 26, 2019

When Posh Spice made her debut at a Salt Lake City municipal shelter, it was clear she’d need more than a day at the spa to look and feel like a million bucks again. The Persian cat’s fur was dirty, her nose and eyes were runny, and her teeth were in such bad shape they were moving in wrong directions.

Posh Spice needed the kind of medical care that most large shelters can’t provide, and so she was brought to the Best Friends Lifesaving Center in Salt Lake City. There, she would receive the care she needed for her extensive health issues, as well as sufficient time to heal and a chance to curl up on her adopter’s lap, which for any homeless cat is the true lap of luxury.

Dental work for a Persian cat

When eight-year-old Posh arrived at the center, the first item on the agenda was to get her to a veterinary clinic for dental work. Posh also had what’s known as stenotic nares (closed nostril openings), which is a condition commonly found in brachycephalic breeds, such as in Persians.

The clinic was able to open her nostrils while performing the dental work, and after a little rest, she returned to the center feeling good and looking fabulous again. Now all she needed was a home of her own.

Janet Deisley was checking out the Instagram page of Best Friends in Utah when she saw a post about Posh Spice. And since her good friend, Kea Barker, was looking to adopt a fluffy cat like Posh who could be a companion for her own Persian cat, Oscar Oscar, she shared the post. Kea, who lives just outside of Vancouver, Canada, was immediately interested in learning more about Posh, so Janet visited the center the next day to meet her.

Posh Spice is laid-back, but will be there for you when you need to chat. This eight-year-old girl required specialized surgery to help her breathe. Now sweet Posh needs a calm home to spend her golden years in. Come strike up a conversation with Posh and learn more about this lovely lady. #SaveThemAll #BestFriendsAnimalSociety #saltlakecity #slc #persiancat #exoticlonghair

“Posh was tucked up inside one of the cubes in the adoption room,” says Janet, who wasn’t worried that Posh wanted to stay put. “As I was learning about her medical history, she let me pet her inside the cube, but she clearly did not want to come out.”

When Janet sensed Posh was comfortable with her, she gently pulled her to the front of her cubby and managed a quick face time chat with Kea. “Although Posh resisted at first, she never clawed, bit or hissed. She was very gentle,” says Janet.

Kea sensed that gentleness and had a good feeling that Posh and Oscar Oscar could get along just fine. After discussing Posh’s medical history with Best Friends staff, she decided to adopt her. There was just one logistical issue to work out: How would Posh Spice get from Salt Lake City to Canada?

Luckily, Janet and her husband were planning a ski trip to Whistler (near Vancouver) within the next couple of weeks and were happy to deliver Posh Spice on the way. “Sometimes things meant to be just fall into place,” says Kea.

For the next couple of weeks, Posh Spice relaxed at Janet’s home as she got everything ready for the three-day trek to Canada. Plans changed slightly when Janet’s husband couldn’t make the journey, so Janet and Posh Spice ended up taking a girls’ road trip together.

Winter weather made driving tricky, but with Posh as a traveling companion it was a lot less daunting. “She was so sweet and seemed quite content in the carrier on the passenger seat,” says Janet. “The only sound she made was purring.”

At first, Posh Spice was afraid in the hotel room and hid, but as the night progressed, she became more confident. Eventually, she joined Janet on the bed to watch television — just two friends on an adventure together.

Cat thrives in her new home

After a few nights on the road, plus a 40-minute ferry ride over to Kea’s home in Gibsons, British Columbia, Posh Spice made it to her final destination. Based on her communication with the center team, Kea was already confident that she could provide a great life for Posh. But when she saw Posh Spice for the first time, she couldn’t believe her luck: Posh was more beautiful and sweeter than she expected.

Today, Posh Spice seems to be enjoying life as a Canadian. “She’s thriving now,” says Kea. “She’s exploring all corners of her new home and she and Oscar Oscar are becoming acquainted — even touched noses a couple days ago.”

Oscar Oscar is fascinated by Posh Spice, especially when she plays with peacock feathers and chases her ball. Kea believes the two will be best friends before long.

“It’s going to take a little time before Posh Spice feels confident that she’s now in her forever home,” says Kea. “But I’m so grateful to Janet for discovering and delivering Posh to us, and to Best Friends for trusting us to provide a loving home.”

Adopt a cat and give them the lap of luxury