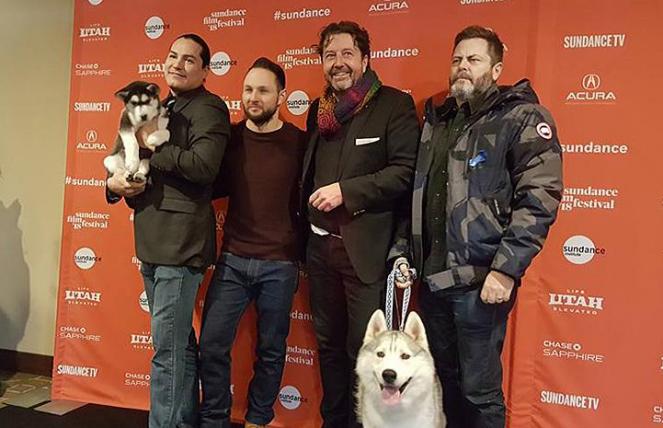 Being part of the Best Friends Network gives animal welfare groups across the country the tools they need to save more lives and the chance to work together to Save Them All.

Best Friends has network partners in every single state, and all of them are saving lives daily. We never get tired of hearing their stories, and that’s why we want to share them with you, too. So today, we're proud to present one from the Arctic Breeds Rescue in Provo, Utah.

The 2018 Sundance Film Festival was, as usual, packed with celebrities. But the attendees everyone really wanted to meet were two dogs named Shazam and White Fang, who are part of Arctic Breeds Rescue.

"Everywhere we went, we had people commenting about how excited they were for us to be there and how they had been looking forward to having the dogs come," says Maren Gibson, founder and director of Arctic Breeds Rescue. "We had several photographers and press individuals comment that this was their favorite event of the entire festival."

Maren and the dogs were invited to Sundance to promote the film White Fang, based on the Jack London novel. They had a packed schedule there, visiting events and having their pictures taken from morning until night.

"(There was) no leisure time. We had a pretty packed schedule," Maren says.

Maren calls her dog Shazam her "rescue ambassador," and Sundance wasn't this guy's first time in front of a camera. He's appeared in catalogues and is so comfortable (and hammy) having his picture taken that Maren calls him "Zoolander."

White Fang, the puppy, is newer to the game. He was part of an accidental litter born in November. The dogs' family reached out to Maren for help placing the puppies into good homes and getting the mother dog spayed.

The rookie was a natural, too, as you can see in the photos of him hobnobbing with human stars of the film: Nick Offerman, Eddie Spears, and Stephen Kramer Glickman. "The dogs loved it,” says Maren. “They were really well behaved and friendly.”

The human stars were at their best, as well. Nick Offerman spent a while telling Maren about his own two dogs and was so obviously enamored with White Fang the puppy that BuzzFeed even wrote a story it. The headline says it all: "I want someone to love me like Nick Offerman loves this puppy."

There's nothing not to love about all this puppy love, as adorable as it is. And Maren says this Sundance visit is also "a wonderful opportunity to bring animal rescue awareness to people who could have a large impact. Meeting the actors was, of course, exciting, and I was so proud of our dogs."