Pets and people come together for a sunny Strut Your Mutt 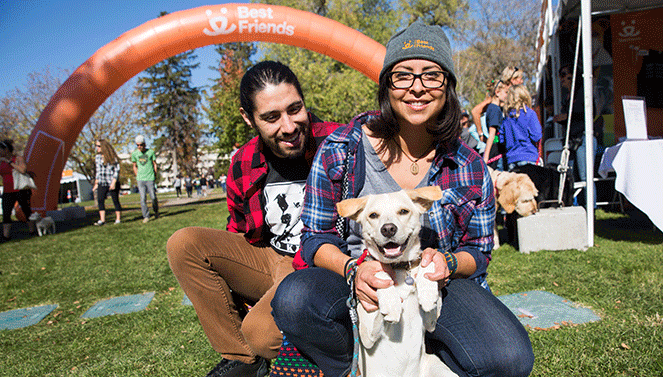 What would inspire nearly 2,500 people, 1,000 dogs and one goat to join 26 local network partner groups one sunny Saturday in Salt Lake City’s Liberty Park? Taking part in in Best Friends Strut Your Mutt, presented by BOBS from Skechers — that’s what. This year’s Strut Your Mutt event raised a total of $270,000, of which nearly $150,000 went to Salt Lake City animal rescue groups to support their lifesaving work for homeless pets.

“Salt Lake City is a community that cares deeply about homeless pets,” says Arlyn Bradshaw, executive director of Best Friends–Utah. “The success of this year’s Strut Your Mutt shows we are one step closer to reaching our goal of making Utah a no-kill state by 2019.”

Get involved. Volunteer with Best Friends.

For Karma, a dog who took part in this year’s Strut Your Mutt, every step she took with her canine friends was a small victory. Last year, the Siberian husky was hit by a car and soon after dropped off at a local municipal shelter with her pelvis fractured in four places. The shelter contacted Arctic Rescue, which found Karma a foster home and a veterinarian who could perform the surgeries she needed to heal.

The funds raised by Arctic Rescue during last year’s Strut Your Mutt helped the organization pay for Karma’s surgeries. And as Karma walked alongside Maren Gibson, founder and director of Arctic Rescue, Maren was reminded of how important the event is for dogs needing medical care. “Karma was in a lot of pain,” says Maren. “Her surgeries were very expensive. It was a relief to know we could afford them and that she could have the life she deserves.”

Strut Your Mutt is also vital in helping rescue groups raise awareness of their lifesaving work, and it is a great way for them to network with each other. “The more people who know what we do, the more opportunities we can have to help our dogs,” says Maren. And it’s also educational. At Strut Your Mutt, people can meet dogs like Karma and learn about the breeds helped by Arctic Rescue, such as Siberian huskies and Alaskan malamutes.

“It’s such an important event for us,” says Maren.  “Without taking part, we would not be able to help so many dogs. It’s essential in order for our rescue to thrive.”

Homeless pets get support from people, places — and planes

Delta Airlines, a Strut Your Mutt corporate sponsor for the past 21 years, takes it a step further with its Team Delta Force, which is made up of a group of dedicated animal-loving employees. “We continue to make each year bigger and better,” says Lisa Wilcox, a member of the Delta Force team, which also was formed 21 years ago. “We are all in the fight to Save Them All.”

For this year’s event, Team Delta Force walked in honor of a deceased fellow employee, along with the employee’s dog and family.

“Strut Your Mutt is our biggest fundraiser of the year, but it’s also a celebration of our pets and what they bring to our lives,” says Arlyn. “From the weather to the coming together of so many people in support of Best Friends, we simply couldn’t have asked for a better day.”

Adopt your next pet from Best Friends