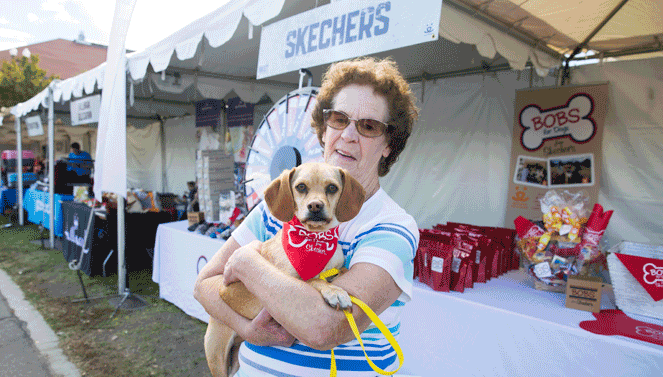 Event gets Utah even closer to becoming a no-kill state
By: By Nicole Hamilton on October 18, 2016

More than 20 shelters and animal rescue groups came together recently at the Utah State Fairpark for the Best Friends NKUT Super Adoption presented by BOBS from Skechers, and they all came together with one common goal: to help save the lives of more homeless pets. And by the end of the weekend they could consider their mission accomplished.

It’s all part of No-Kill Utah (NKUT), an initiative led by Best Friends, which brings together passionate individuals, city shelters, and a coalition of animal welfare organizations to end the killing of dogs and cats in shelters throughout Utah by 2019. During the event, nearly 500 homeless pets — including cats, dogs, rabbits and even a ferret — were adopted at the two-day event, made possible by sponsor support from BOBS from Skechers, Hallmark Gold Crown, Petco Foundation, Delta Airlines, Fox 13 News and Broadway Media.

“The fall NKUT super adoption was of the most successful adoption events we've ever had,” says Sandy Nelson, NKUT manager for Best Friends–Utah . “And it was all made possible by our shelter partners, rescue partners and a supportive community that realizes it's better to adopt than shop.”

BOBS from Skechers sweetens the deal for two sweet pets

Humphrey the cat already had a lot going for him. The big brown senior tabby, who was brought to the super adoption by Utah Animal Advocacy Foundation, is sweet and laid back, and his favorite kind of chair happens to be a lap. Humphrey scored a great home at the super adoption with a family that had two cats at home until one recently passed away. When his new family first saw him, they knew he would be a great company for their other cat. And because Humphrey was a BOBS from Skechers-sponsored pet, his new family got to go home with two great gifts that day — a gentle new companion and a basket of goodies from BOBS from Skechers.

Cola, a beautiful American Staffordshire terrier mix, also found a home at the super adoption with a little help from BOBS from Skechers. Cola, with a mile-long smile that lit up the fair park, came to the super adoption by way of Weber County Animal Services. Cola’s family was also presented with a basket of items from BOBS from Skechers that will help make the transition to Cola’s new home a smooth one.

A weekend full of special connections

The weekend was also pretty special for two four-year-old dogs. Penelope and Petunia not only found homes at the super adoption, but also helped mend the heart of their adopter, Sommer Wagner, who was still getting over the passing of her dog. Sommer came to the super adoption unsure if she was ready to welcome a new dog into her life, but as soon as she saw the two dogs together, it was apparent that she was more than ready.

Sommer had brought two leashes to the super adoption “just in case.” And it turned out to be a great idea, because that day both Penelope and Petunia went home with Sommer.

Get involved. Volunteer with Best Friends.

Super adoption gets Utah one step closer to no-kill

Today, Utah is well on its way to becoming a no-kill state, and events like the Best Friends NKUT Super Adoption are helping to make it happen.

“It was so wonderful seeing a steady stream of families, couples, individuals —  just people from all walks of life coming in during the event with excitement on their faces — looking for their new family members,” says Arlyn Bradshaw, executive director of  Best Friends–Utah. “And with the ratio of cat adoptions rising, I feel our community is really stepping up to make No-Kill Utah a reality and an achievable goal around the state.”