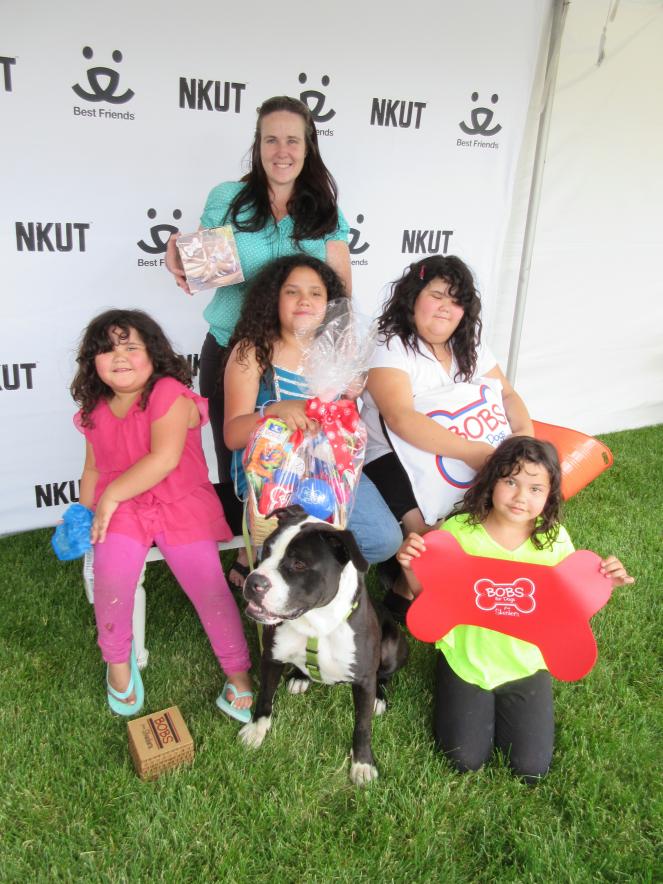 Best Friends and coalition partners come together to save hundreds of lives.
By: Nicole Hamilton on May 24, 2016

The lives of 518 homeless pets were saved last weekend at the Best Friends NKUT Super Adoption, presented by BOBS from Skechers at the Utah State Fairpark in Salt Lake City. In fact, so many homeless pets found forever homes that it was Best Friends–Utah’s most successful super adoption to date.

“The atmosphere all weekend was really energetic, positive and upbeat,” said Kim McDaniel, communications manager for Best Friends–Utah. “From the minute the doors opened, we stayed busy.”

A super weekend for senior cats

For this super adoption weekend, older cats got the majority of the spotlight. It was a great opportunity to help some deserving adult cats get into their forever homes. NKUT coalition partners, including the Humane Society of Northern Utah (HSNU), brought adult cats to the event with the goal of finding them homes and creating more shelter space for other homeless cats.

“Even if only one of our cats got adopted, it would have been worth it to take part in the super adoption,” said Ashley Schmittling, HSNU director of adoptions, rescue and foster coordination.

Presenting sponsor BOBS from Skechers also gave a helping hand to two pets, with the hope that it would give them a boost into their new homes. Franklin, a 21-pound orange tabby from Davis County Animal Services, was the first of the two sponsored pets to go home, along with a boatload of goodies provided by BOBS from Skechers. And while everyone cheered for the extra-large kitty, people’s fingers were crossed extra hard for Aries to find the same luck.

A gorgeous black and white dog from Cache Humane Society, Aries was the second pet sponsored by BOBS from Skechers during the event — though for a while it looked like he might be out of luck for finding a home that weekend. But then at the very end, a woman with four young daughters noticed Aries.

After spending a bit of time with Aries and introducing him to all four of the girls, it became clear that he was a great fit (see photo above). And all of the family members sure could use it, because they’d come to the event after a particularly rough time. As they filled out the paperwork to make the adoption official, they were presented with the prize pack from BOBS from Skechers, which drove the adopter (and, if we’re being honest, everyone else in the vicinity) to tears. She said, "I already felt like the winner."

While every single adoption gives us the warm fuzzies, there were even more extra special connections to celebrate at this year’s event. It was also a great weekend when people with special needs found their perfect match.

An attendee with cerebral palsy found his perfect companion in a dog named Bolt and gave him a forever home. Another attendee, who is paralyzed from the waist down, adopted a companion to sit on her lap while she’s in her wheelchair. And Star, a sweet and quiet dog, found a forever home in a family that includes a young autistic son who was fearful of dogs — until he met Star at the super adoption.

The Best Friends–Utah team used an innovative way to promote and share the event in real time through live video feeds on their Facebook page. And for the first time, they also used Snapchat after creating a special Best Friends geofilter for attendees to use at the event.

When it was all over, everyone had cause to celebrate the weekend’s success. Each dog and cat finding a new home received a “welcome to the family kit” from Petco Foundation to help them settle into their new homes. Best of all, they have a future filled with love to look forward to.

Special thanks to our sponsors BOBS for dogs from Skechers (presenting sponsor) and Petco Foundation, as well as to each volunteer and network partner group who helped make this the biggest, best super adoption yet.