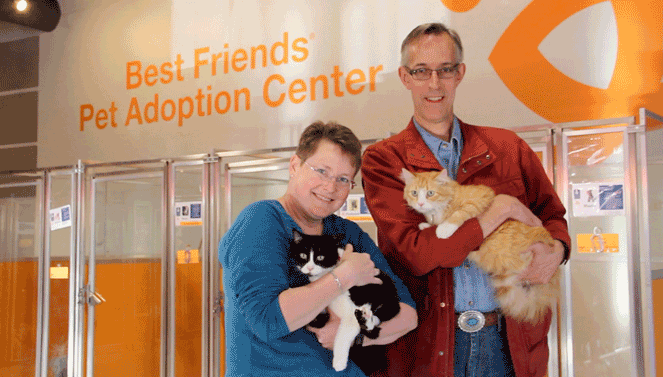 Antje is one of the approximately 50 volunteers who come in at all hours of the day and night to help care for the many hundreds of kittens helped through the kitten nursery each year. On the days when Antje volunteers, she arrives at five in the morning and is off to her own job by 8 a.m.

Later that afternoon, her husband Wade will be at the Best Friends Pet Adoption Center just across town, walking and working with adoptable dogs of every size, type and color. You can spot him right away because he’s likely the tallest person there and has a smile on his face that suggests there’s no place he’d rather be.

Antje might be a little harder to recognize — mainly because her nametag says, “Tina.” Ask her why and she’ll simply say, “Because Tina is easy to say and read. It’s not about me. It’s about the animals.”

Antje and Wade have only been volunteering with Best Friends since July of 2015. But in that time, they’ve become leaders and key members of the volunteer team in Utah.

“They’re such great representatives of everything Best Friends stands for,” explains Jenn Taggart, the foster and volunteer coordinator for Best Friends–Utah. “They just exude positivity and treat everyone they meet with a certain level of respect. They arrive early, stay late. Their work ethic is incredible.”

Incredible is right. Since last July, Antje has logged nearly 80 volunteer shifts and Wade nearly 90. In addition to the time they spend at the kitten nursery and adoption center, Antje and Wade volunteer from set-up through teardown at super adoption events, laughing and smiling through what amounts to some very long, busy days.

“They’re the most willing workers I’ve ever seen,” says Jenn. “The thing that impresses me the most is that there’s just no ego with them. They’ll happily do whatever is needed whenever it’s needed. Cleaning dirty cat kennels, carrying tables, helping with adoption interviews — they do it all.”

Helping small, shy dogs come out of their shells

One of the other many reasons that Wade is such an invaluable member of the team is his ability to handle just about any type of dog.

“Wade is super tall,” laughs Jenn. “And tall people — especially men — are usually really intimidating for some of the smaller, less confident dogs we see here. But he’s great with the little, shy kids. He has such great energy, he moves slowly and is really patient. He lets them come to him.”

Wade’s savviness with the little dogs is quite often a lifesaver, because having someone like him there to offer thoughtful socialization and support to dogs who might be fearful of men helps those dogs successfully transition into new homes.

“It’s really neat to see all the different types of dogs who come through here,” says Wade. “Some of them really tug at your heart strings. I still remember this one little Chihuahua who had been hit by a car, but miraculously survived. And sure enough, someone saw him and adopted him, too.”

Did you say kitten nursery?

While Wade has spent most of his life around dogs, Antje grew up without pets. So, for her, volunteering was the perfect opportunity to meet an endless parade of adorable animals and ease into the pet adoption experience.

“We had been thinking about volunteering with an animal welfare group of some kind for a while and just hadn’t gotten around to it,” explains Antje. “And then a co-worker of mine mentioned that Best Friends had a kitten nursery where you could volunteer.”

According to Best Friends staff, Antje has been a “rock star” with all things kitten since she arrived. In addition to her diligence with volunteering at the kitten nursery, she was instrumental in getting 17 kittens adopted in just two hours at last fall’s super adoption.

Antje also gets a kick out of the creative names that staff and volunteers come up with for new litters of kittens. Always on the lookout for a really clever set of names, she happily recalls one litter that struck a chord with her professionally. “I came in one morning and realized they had named these three kittens after operating systems: DOS, Linux and Unix,” says Antje. “I’m a computer programmer so I immediately thought that was so great.”

In addition to her many kitten duties, spending time socializing the adoptable cats at the pet adoption center is also a regular part of Antje’s volunteering time.

Why adopt one cat when you can have two?

After a few months of volunteering, Antje and Wade were ready to explore adopting their first pet together. And last November, they did — and then immediately decided to take a second one home, too!

Trisha, a lovely 10-year old tuxedo cat, and Cheddar, a super fuzzy, fun-loving three-year-old cat are now feline partners in crime in the Fowler household. And they seem to have settled in as though they’ve always lived there. Now the only problem is that every time Wade and Antje come home from volunteering, Trisha and Cheddar have the sneaking suspicion that they’ve been spending time with other cats.

With their new toy-swatting pair lounging comfortably at home, Antje and Wade are gearing up for the next NKUT Super Adoption in early May. This year, Antje and Wade have been asked to volunteer as cat tent captain and dog tent captain, respectively, because they’ve become such a staple in the Best Friends team.

“They’re my go-to people,” says Jenn. “Super adoptions are long days with lots of things happening at once, and we know we can rely on them for just about anything.”

Despite what are sometimes long and hectic days, Antje has some simple words of advice for anybody who volunteers on behalf of homeless pets. “Enjoy the ride. Learn as you go. Just roll with it, because the animals and the people are just great.”

To see Antje and Wade in action, check out the following video about their volunteer and adoption experiences at Best Friends: