Salt Lake City cheers for The Champions at screening 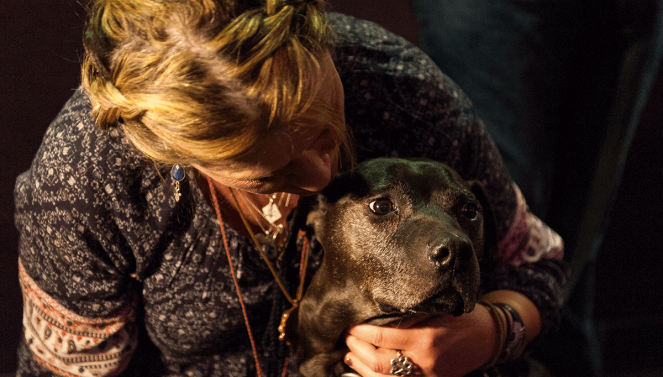 Salt Lake City’s animal lovers snatched up so many tickets to see the Utah premier of the documentary that the original theater couldn’t hold them all.
By: Christina Green on February 01, 2016

Everyone loves something to cheer about and The Champions certainly delivered. The film — the only full-length, feature presentation at the Pawparazzi Film Festival — tells the story of five of the pit bull terriers rescued from the notorious dog fighting ring of NFL quarterback Michael Vick.

Salt Lake City’s animal lovers snatched up so many tickets to see the Utah premier of the documentary that the original theater couldn’t hold them all.

“We bumped up to a larger theater a few days before the screening,” says Kim McDaniel, communications manager for Best Friends–Utah, “and we nearly sold out those 300 seats.”

Both heartbreaking and uplifting, the film explores themes well beyond the dogs. The story of their journeys places a furry face on difficult topics like prejudice and being misunderstood, as well as the power of resilience and the strength of the human–animal bond.

So the pocket pack of tissues, featuring the Best Friends logo that was provided to each attendee, came in handy.

In addition to the show, Best Friends hosted a red carpet event and a private reception for people with a particular passion for helping Utah’s homeless dogs and cats.

Afterward, the audience had a little time to discuss the movie and the plight of pit bull terriers. On hand to answer a few questions were Arlyn Bradshaw, Best Friends–Utah executive director; Francis Battista, Best Friends co-founder; and John Garcia, Best Friends emergency response manager, who was instrumental in the rehabilitation of the Vicktory dogs at Best Friends Animal Sanctuary. A special appearance by Vicktory dog Halle (pictured) and her person, Traci Madson, delighted the crowd, too.

“Halle and every Vicktory dog attending these screenings bring home the essential message of the film (that every dog is an individual) more effectively than anything else I can imagine,” says Francis.

It’s no surprise then that Halle nearly stole the show. “Halle was a huge hit with attendees,” says Kim. “She got as many (if not more) requests for greetings and photos than John Garcia.”

Francis, who has attended most of The Champions screenings at film festivals across the country, says the movie has been well-received everywhere. “I think we are making great progress,” he says of the struggle to raise awareness about the plight of pit bull terriers. “But there is still much work to be done.”

Best Friends, its No-Kill Utah Coalition partners and all of its partners across the country intend to continue that work.