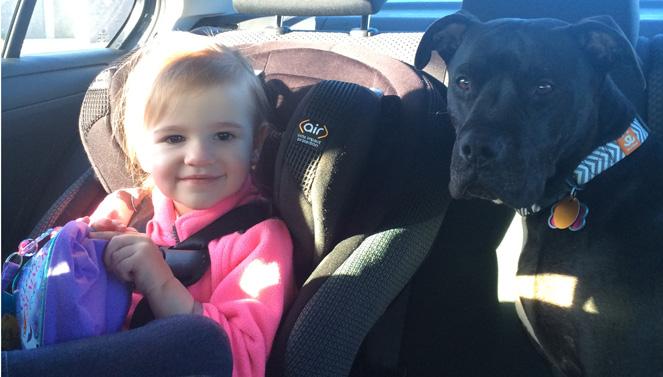 Roseanna, with her beautiful ebony coat and large longing eyes, waited. The sweet, shy pit bull terrier had been overbred in a former home, and then she ended up at West Valley Animal Services in Utah. But as the weeks, and then months went by with no adopters showing interest in her, Roseanna must have begun to wonder what the point was. Why was she sitting in a kennel instead of living in a home? But shelter staff was determined to help the black dog find her forever home, and leave the shelter for good.

Luckily for Roseanna, West Valley Animal Services is one of several Utah shelters to get extra help from Best Friends to find homes for pets. Shelters bring adoptable dogs and cats to the Best Friends Pet Adoption Center in Salt Lake City, where Best Friends staff and volunteers dote on them and show them off to potential adopters.

Cheering up a homeless mama

Mandy Parry is a Best Friends volunteer who spends her Sunday mornings walking dogs at the pet adoption center. And while she loves all dogs, she’s got an extra soft spot for older pit bull terriers, like Roseanna. “You could tell she had a hard past and I wanted to make her time at Best Friends special,” says Mandy. “I wanted to gain her trust and restore her happiness.”

Erin Olsen, Best Friends adoption specialist, saw Roseanna’s personality start to change with Mandy’s help. “This poor momma appeared to be very depressed, curling up and sleeping almost the whole day. It was difficult for volunteers to coax Roseanna off her bed just to go out for a walk,” says Erin.  “Mandy always made sure to spend some extra time just sitting with Roseanna in her kennel, offering her pets and kisses, trying to cheer her up.”

As the weeks and months went by Mandy and Roseanna began to look forward to spending special time together. The two went on long walks where Mandy would take time to sit in the grass with Roseanna and love on her. Over time Roseanna started to feel more comfortable and even began chewing the toys Mandy gave her and sitting at the front of her kennel, looking to people for attention. “It was thrilling to see her personality emerge,” says Mandy.

It grew harder each week for Mandy to say goodbye to Roseanna at the end of her volunteer shift. Roseanna was rarely far from Mandy’s mind, and her whole family heard a lot about the sweet dog before ever setting eyes on her. On Valentine’s Day Mandy convinced her husband to just meet her – and it was love at first sight. Then the entire family convened at the pet adoption center, including their two children, and their two terrier mixes. There really was only one thing to do after all those introductions.

The Parrys officially adopted Roseanna that day and things haven’t been the same since. “Roseanna is pretty fond of our dog Sirius Black and we catch her licking his face,” says Mandy. Roseanna’s no longer a shrinking violet, actually she’s quite the opposite – she loves playing hide and seek with the children and laying in the sunshine with her canine siblings. Mandy laughs at how Roseanna follows her around the house and how the big black dog thinks she’s a lapdog, her large frame spilling over the kid’s legs as she perches on them.

When Roseanna isn’t snoring up a storm, she’s standing tall with the confidence of a beloved family behind her. “The pet adoption center gives incredible dogs like Roseanna a second chance,” says Mandy. “We love her for who she is and it feels amazing to know we are bringing her out of her shell.  She is truly happy now.”

To help more animals like Roseanna go from homeless to home, give a gift of support to Best Friends

Learn more about how Best Friends is working to make the state of Utah no-kill.