Beat the heat by spaying or neutering before spring 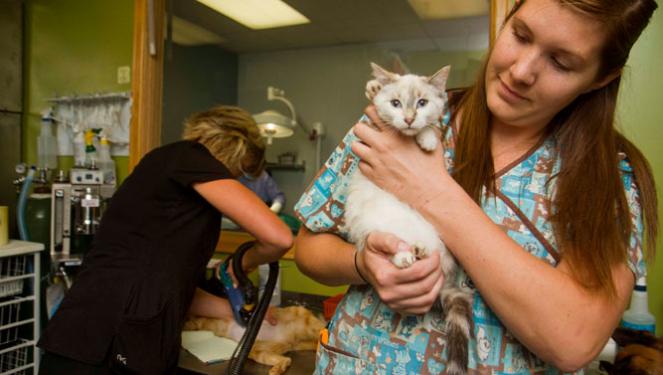 The mild Utah weather this winter has been lovely, but for the cats of the Beehive State it means they’re starting their heat cycles sooner. That means kitten season will start much earlier than normal, resulting in more animals entering the shelter system.

But thanks to Best Friends Animal Society, folks have many low-cost and no-cost options heading into the kitten season of 2015. They can “beat the heat” and easily become part of the solution by having their house cats and community cats fixed before the spring is in full bloom.

“Utah has made tremendous strides toward no-kill, and our save rate for both dogs and cats is consistently rising over the years,” says Ashley. “However, we're still seeing a disproportionate number of cats entering our shelters compared to dogs. And we still have many community cats out there who need to be fixed.”

To help the residents of Utah County, Best Friends Spay/Neuter Clinic in Orem will spay or neuter cats for just $10. And for community cats (outdoor ownerless, free-roaming felines), it’s free. For those cats in other parts of the state, Best Friends makes available easy-application, spay-neuter vouchers for low-income residents, which are redeemable for services at participating local veterinary clinics.

“Just since November we’ve spayed and neutered thousands of cats,” says Ashley. “We are not just trying to keep down the number of animals entering the shelter. We also want every cat to have access to the health benefits of being spayed or neutered.”

Besides averting unwanted pregnancies, Ashley says that spaying or neutering can prevent common cancers from developing in cats and dogs — like testicular cancer in males and uterine, ovarian and mammary cancers in females. Further benefits include thwarting unwanted and messy behavior that occurs when pets reach their sexual maturity, such as roaming, showing aggression, spraying (marking) in males and nuisance behaviors due to heat cycles in females. “It's a simple procedure that everyone benefits from,” says Ashley.

Some people want to delay having their cat spayed or neutered, but Best Friends has an entire campaign dedicated to convincing them why it’s important to have pets fixed as early as possible. Fix at Four encourages people to have animals spayed or neutered at four months of age.

“Also, it's important to remember that cats can become pregnant immediately after having a litter,” says Ashley. “So letting a cat have that litter puts her at risk for accidentally becoming pregnant again, and for the cycle of unwanted litters to continue, possibly spiraling out of control.”

Another fact some might not be aware of is that cats can be safely fixed while in heat. So it’s not too late to get all the health benefits and prevent unwanted pregnancies, even if the heat cycle has begun.

“There are just too many cats entering the shelter. The solution is so simple, and in many cases it’s low-cost or no-cost to those who have cats,” says Ashley.