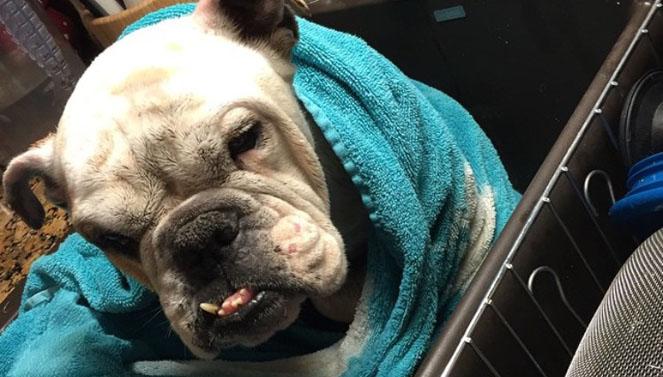 The family members were so excited to move into their new home, but, unfortunately, their excitement could not be shared with their loveable bulldog, Sophie. She would not be joining them. She had incontinence issues, and because of that, the family felt they couldn’t keep her anymore.

Luckily, the Bulldog Club of Utah, an organization that helps rescue bulldogs, welcomed Sophie with open arms. And to help even more homeless animals like Sophie get a second chance, the organization joined the No-Kill Utah (NKUT) Coalition, led by Best Friends Animal Society, which brings together individuals, city shelters and other animal welfare organizations to end the killing of dogs and cats in shelters throughout the state. The 50th partner to join NKUT, Bulldog Club of Utah exemplifies the dedication each partner brings to helping Utah become a no-kill state. .

Bulldog Club of Utah  takes in dogs either from families who surrender them, or from animal control agencies and shelters. A lot these dogs are at-risk in traditional shelter settings. Susan Tibbitts, foster coordinator of Bulldog Club of Utah, says: “We have many dogs coming in from backyard/commercial breeders. These suppliers do not give a thought to the concept of breeding healthy dogs, and until people stop buying these dogs we are not going to see a decrease in the numbers of dogs entering the shelter.”

One of the advantages of being a NKUT partner is the chance to participate in some of the state’s biggest animal welfare events. “Some of our members put a huge effort into attending Strut Your Mutt, and (then) express interest in becoming an actual part of it all,” says Susan, who is also thrilled about the ability to increase her organization’s reach through the other programs, promotions and events offered by NKUT throughout the year.

Taking part in the NKUT adoption weekends is something that new coalition member, Ruff Patch Rescue, is excited about. Last year was Ruff Patch’s most productive year with 213 adoptions.

Stacie Ward, coordinator and founder of Ruff Patch Rescue, says as her rescue grew, the organization wanted to participate in more events like Strut Your Mutt and mega-group adoption events. Once enough volunteers were available to make it possible, they signed on to join NKUT and to start coming to events. Stacie says, “We know that becoming a no-kill state takes a community, and each group that steps forward is another step in the right direction.”

Tracy Kelley, NKUT Coalition manager, has watched the momentum grow from the early 2000s when the coalition first came together. Tracy marvels at how much progress has been achieved over the years. “Everyone is working hard to put aside their (organizational) differences and pull together for the good of the animals,” says Tracy. “More groups are rescuing from more shelters. More shelters are finding innovative ways to increase adoptions and decrease intake. More communities have established effective community cat programs. Indeed, through our marketing and outreach efforts, the public has embraced the no-kill movement.”

NKUT’s success is built on groups committed to the big picture, as well as the individual animal — such as Bulldog Club of Utah, where Sophie, after a year there, was finally transported by the club to her new loving home in New Mexico.

Learn more about NKUT at http://nkut.org