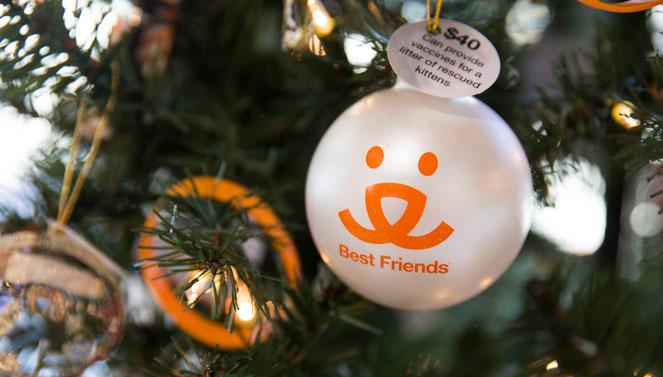 Best Friends–Utah has been saving animals in need all over the Beehive State since 1999. In 2013, the Best Friends Pet Adoption Center opened in the Sugar House area of Salt Lake City as a place to adopt shelter animals. It also includes a pet food pantry, resources for spay/neuter, and a staff centered on helping both pets and people. As part of the recent holiday celebration, a special Christmas giving tree was installed in the center’s lobby where folks could contribute toward the support of homeless animals and, in return, receive a cherished keepsake.

The giving tree, installed in time for the Sugar House Winter Carnival open house on December 6, was prominently displayed so that every visitor had an opportunity to make a donation and take home a beautiful ornament. Each ornament had a different donation amount, making it affordable for the largest number of people to be part of the giving tree. Amounts ranged from $10 up to $500. The tree not only was successful, but also was quite the conversation piece. Since Best Friends is entirely funded by donations, the giving tree emphasized the importance of individual giving in making all the lifesaving work possible at the center.

The tree was the brainchild of Kim McDaniel, communications manager Best Friends–Utah. Kim had seen ads for the popular Angel Tree Project, which helps families in need by providing a shopping list of items that donors can then purchase and drop them off at a collection point. Kim thought it was a great idea that could be applied to helping pets.

“I wanted to make it easier, and (make it possible) to collect donations for things like spay/neuter surgeries, which we obviously can't just have someone go out and buy,” says Kim. “I found out that Best Friends–Los Angeles had done a tree last year at the NKLA Adoption Center, using donation amounts with information on what each donation could buy. So we ran with that idea. We made sure to have amounts with the things our Utah programs need most, so that anyone who wanted to donate could find an amount and a local effort to help with.”

To help spread the word of the giving tree, Best Friends–Utah turned to Facebook and Instagram. The response was overwhelming. The beautiful ornaments (white glass balls with the NKUT logo on one side, and the Best Friends logo on the other) were “must-haves” for many folks. Other styles included ornaments from the Sanctuary, with images of the animals and Angel Canyon. The selection allowed many gift givers to purchase multiple ornaments to distribute among their friends and family.

“People were asking if they could buy the ornaments or get them online or via mail order,” says Kim. “We don't have the capability to do any of that from our Utah programs office, so it really drove traffic in to the Pet Adoption Center. While people loved the ornaments, they really loved the idea that they could help the animals with a flexible donation, have some idea what it might be going toward, and get their own beautiful keepsake to take home as a remembrance of their generosity.”

The generosity of the community exceeded Kim’s expectations. Nearly $3,000 was raised in just under three weeks, and it’s really the gift that keeps on giving. The Best Friends ornaments distributed among animal lovers far and wide will continue to educate people on the work of Best Friends for years to come.