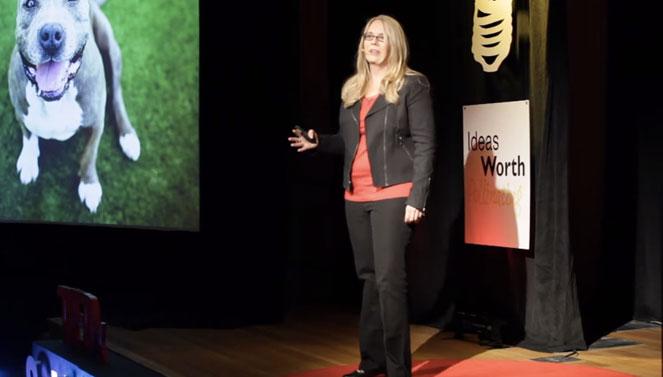 The aftermath of the most publicized dogfighting bust in the U.S. resulted in another moment for the animal welfare history books. The dogs seized from Michael Vick’s property were given a fair shake. For the first time, canine victims from a dogfighting ring were evaluated and given an opportunity for rehabilitation. Best Friends took in 22 of the dogs and got to know each one as an individual.

The legacy of the Victory dogs (as they became known) seven years later is still changing hearts and minds about what should be done with animals seized from illegal dogfighting operations. And recently during her powerful TEDx Talk in Salt Lake City, Julie Castle, chief marketing, communications and development officer at Best Friends, explained why the successful rescue of the dogs was important to canines all across America.

Julie described the challenges that Best Friends faced as the organization advocated for saving the dogs. She also spoke of how rescuing the Vicktory dogs has changed the way these canine  victims of dogfighting operations (large and small) are treated. The entire Vicktory dog incident has resulted in new lifesaving policies, with national animal welfare organizations joining together to take a stand against the routine killing of innocent dogs. And it’s all thanks to a core belief that Best Friends holds dear — that each animal is an individual and should be treated as such.