Giving thanks for new homes 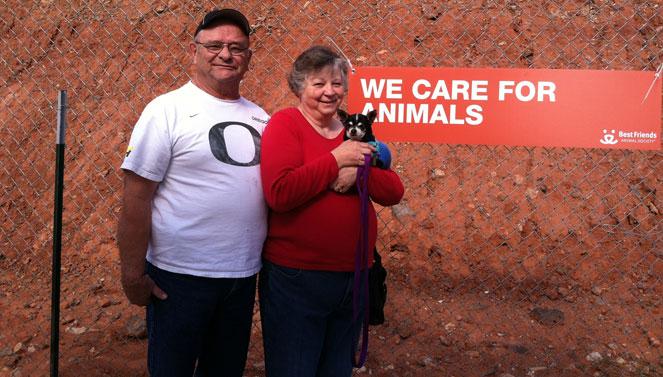 Earl, an older, scrappy, Chihuahua was the first of approximately 90 homeless pets to be adopted at the biggest holiday adoption event on the Utah-Arizona-Nevada border. The Southern Utah Mega Adoption event, sponsored by PetSmart Charities® in partnership with Best Friends Animal Society, brought 13 animal welfare groups together in St. George, Utah, which is about 75 miles from Best Friends Animal Sanctuary in Kanab. The two day event, spearheaded by Providing Animals with Support (PAWS), resulted in the event nearly doubling the event’s original goal of finding homes for pets.

“This adoption event fills the ‘home for the holidays’ need,” says Lynn Burger, executive director of PAWS. “It makes people feel good to help others during the holiday season — like the elderly, children, families and orphaned animals. Everyone wants to feel good and what better way than to bring home a furry family member to nurture and make a part of your family. We will work until they all have a home.”

Best Friends provided marketing and funding for the event and prepared 65 of the animals for adoption by providing spay/neuter services, administering vaccinations and transporting the animals — all at no cost to the groups.

Most of the organizations participating in the event are members of the No-Kill Utah (NKUT) Coalition. NKUT  is an initiative led by Best Friends Animal Society that brings together passionate individuals, city shelters, and animal welfare organizations to end the killing of dogs and cats in shelters throughout the entire state.

Earl the Chihuahua was there with We Care for Animals (WCFA), a Best Friends No More Homeless Pets Network partner from Mesquite, Nevada. Mandy Meyer of WCFA was thrilled to be part of the event. “Coming from Mesquite where we have a much smaller adoption base, this event gives our dogs a new neighborhood to be marketed in,” she says. “Events like this really make the city come out to see who’s available. We all hope to find our perfect soul-mate matches with the visitors.”

Jerry and ReNee Sprague were in the market for a new pet. When they saw the event advertised online they knew they had to check it out. While ReNee had thoughts of adopting a Yorkshire terrier, little Earl caught Jerry’s eye as they waited in line for the event to open. “My wife used to have a Chihuahua growing up,” says Jerry. “Earl was the perfect size. I knew I wanted to meet him right away.”

The pint-sized pooch climbed right into their hearts and is already living it up in his new home. “We renamed him Kiki, and he’s exactly the right dog for us,” says Jerry. Kiki is proving to be not just a great companion animal in his new home, where he’s been “prancing around,” but he is also making outings a bit more fun. “We’ve already taken him to a baseball tournament,” says Jerry. “He’s just the happiest dog.”

Kiki is just one of the dozens of reasons Best Friends supports multi-group coalition events. “Best Friends is proud to be assisting PAWS, as well as all the participating rescue groups and shelters who are collaborating to save more lives in their own community,” says Tami Simon, Network events supervisor. “It is what we hope and strive for across the country — organizations taking charge and working together to help Save Them All®.”

Find out more about upcoming events.