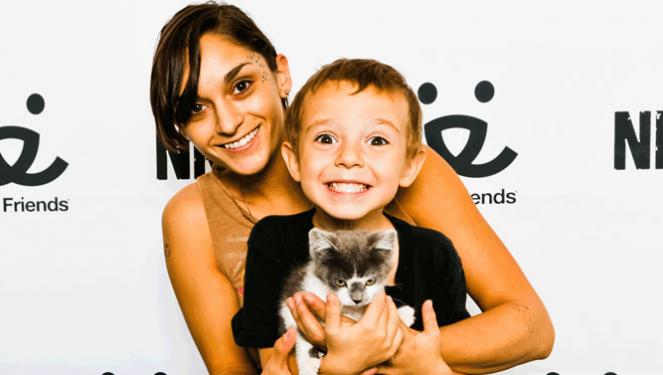 “Mundo adopted me,” says Debby Stone of the loveable cat who made his presence known during the second day of the NKUT Adoption Weekend. Mundo was among the 133 cats and 264 dogs who found their forever homes thanks to the two-day event.

It was the 30th such adoption weekend to take place in Salt Lake City since the year 2000. Like those that preceded it, this one was also a great success for the 19 NKUT Coalition member organizations that brought pets to meet the estimated 4,700 eager attendees. NKUT an acronym for No-Kill Utah, is an initiative led by Best Friends Animal Society that brings together passionate individuals, city shelters, and  rescue organizations to end the killing of dogs and cats in shelters throughout the entire state of Utah by the year 2019.

Pat and Doug MacKinnon were among the 230-plus volunteers helping with the event.  The MacKinnons, former residents of Houston where Pat was an executive director for an animal welfare group, were happy when Best Friends brought the fundraising event, Strut Your Mutt, to Houston a couple years ago. Now that they’ve relocated to Utah, she was equally happy to volunteer at the Salt Lake City event. “Seeing all the people working on behalf of the animals in need is just the best,” says Pat. “It feels great to be a part of something so positive and with so much community support.”

When the MacKinnons met Sindy, a sweet little heeler from Rescue Rovers,  the event became even more meaningful. Pat and Doug fell for Sindy right away. They wanted to get a friend for their senior dog, Dharma, so now Sindy (with the new name Terra) is now adding unexpected antics to the MacKinnon household. “Terra takes our stuff and hides it in her crate. Slippers, socks — if it’s missing, we now know where to look. She’s so much fun,” says Pat.

Ashley Barr of Rescue Rovers said her organization brought approximately 90 pets to the event and 78 were adopted.”  Sindy (Terra) had only been with Rescue Rovers for a week after being pulled from a shelter in New Mexico. Because of the event, she went home right away with the MacKinnons.  Says Ashley: “I am always excited by NKUT Adoption Weekends because I love to see all the rescue organizations in the same place working toward the same goal.”

Debby had been thinking about adding another cat to her household. Her older male cat, Buddy, had been following her around the house more than usual, and she felt a feline friend could help him be less lonely. Since the NKUT Adoption Weekend venue was just down the street, she thought she’d take a look. “It touched my heart when I walked into the event to see so many people in line to adopt pets. I wanted an older, outgoing feline who would stand out among the others,” says Debby, who was leaning toward adopting a female. But after speaking with some folks from Davis County Animal Services, she learned that she might not necessarily need a female — that neutered male cats often get along splendidly.

Just as Debby was meeting more cats on Saturday morning, Mundo (from The Paw Project-Utah) made his move. After jumping onto her shoulder and placing his paws around her neck, Debby knew immediately that Mundo was hers. “Mundo made the decision easy. He’s perfect,” says Debby.

With 397 happily-ever-afters, the NKUT Adoption Weekend, a community-wide celebration dedicated to saving more lives, more than lived up to its billing.

Help bring more events like these to the animals by becoming a Best Friends member.