Local news celebrity is all in for pets 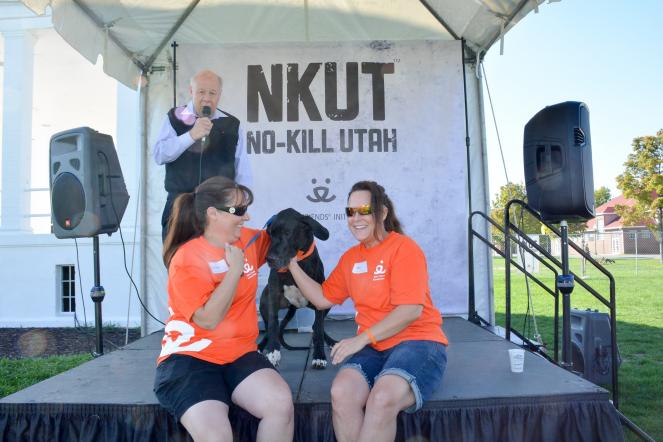 Best Friends super volunteer turns up the volume on animal issues.
By: Denise LeBeau on October 28, 2014

Craig Wirth has been a newsman on KTVX for more than 40 years. He’s the communications director for the Utah Episcopal Diocese and a communications department broadcasting professor at the University of Utah. He’s also a permanent fixture at Best Friends Animal Society events in Salt Lake City, and has been emceeing the organization’s special adoption weekends for more than a dozen years.  An advocate for community cats, Craig is thrilled to be part of the Best Friends family and uses his talents to help countless animals in need.

Craig’s first foray into helping community cats began, quite simply, when he gave a speech during a Best Friends dinner more than 10 years ago. Honored to be among those invited to the event, he told the audience: ”You are the kind of folks who see a couple of eyes in a dark parking lot, and are not the kind who say ‘oh those animals are OK, they’re probably just on their way home.’” He knew those in the audience would get traps ready and sit for hours to rescue those cats.

After the dinner on the way back to work, Craig saw eyes staring at him in the parking lot. He knew exactly what he had to do — and wanted to do. He borrowed humane traps from Best Friends and trapped the community cats, who were living on the streets.  After bringing them back to his house, he set up a cozy space for them in his garage. Then, with Best Friends’ help, he had them vaccinated and spayed or neutered.

While he was committed to the cats, he also knew they were born outside and never interfaced with people, so the best future for them would be to return them to that outdoor life, but with care. So he decided the cats would live at his house, just not inside it.

Since his house is located at an elevation of 7,000 feet, where weather and predators are a challenge, Craig’s garage was the best choice for his cat colony indoor shelter, which allowed them to come and go as they please.

“It seemed logical to turn my garage over to them as kind of a cat playground,” says Craig. “Of course, I forgot that I do get an average of 13 feet of snow, which has to be shoveled off my cars now because the cats are in the garage and the cars are outside.”

Craig hasn’t looked back since he first helped those community cats. “I now have a trap in my office always ready for any such moment,” he says.

For the love of pets

“I have been emceeing the pet adoptions since the first one,” says Craig. This year nearly 370 pets found homes at the NKUT (No-Kill Utah) Adoption Weekend in October. Craig keeps coming back each year for the love of seeing the dogs and cats on their way to start new lives with forever families.  “I’m amazed at the passionate Best Friends (staff) and the many volunteers,” says Craig. “At super adoptions, I see people at their best. I see people who I know have gone out in the rain in the middle of the night to rescue a frightened dog, and only the dog and the person will ever know.”

Over the years, Craig has seen so much evolve in favor of animals in need, and he’s revved up about the future: “The NKUT initiative is one of the most profound goals … I knew people would become enlightened to a new way of seeing our companion animals. The NKUT initiative will be successful and it will be the greatest miracle I have witnessed in my life.”