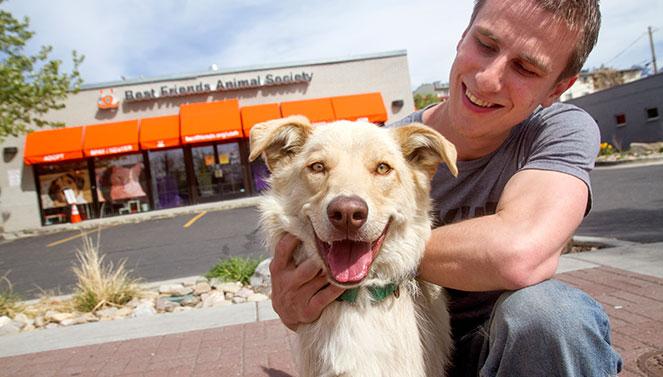 City Weekly is the premier publication for all things hip, happening and newsworthy in Salt Lake. Best Friends Animal Society is the premier animal welfare agency for all things lifesaving, life-changing and resourceful in Utah. Recently, City Weekly’s 25-year-anniversary of the “Best of 2014” section, which touts some of the very best Utah has to offer, included an exciting first for us. From best draft pick to best local rap advocate, Utahans loaned their voice to a gamut of topics. It was an extra-special honor to have been voted the Best Nonprofit this year since it coincides with our 30-year anniversary. And this is not just the best animal welfare nonprofit of 2014; Best Friends was the readers’ winner out of all Utah nonprofits.

"Utah has many strong charities and nonprofits—in fact, Utah is the most charitable state in America—so the fact that Best Friends won our readers' votes is an indicator of the remarkable impact that the organization has made on our community in its 30 years of advocacy and on-the-ground support for animals," says City Weekly managing editor Rachel Piper. "City Weekly is also celebrating 30 years in 2014, and we can't imagine the past three decades without Best Friends."

While Best Friends Animal Society’s headquarters is based out of the sanctuary in Southern Utah, Best Friends has also been a local Salt Lake City presence since 1999. Fourteen years ago, a satellite program was opened in Northern Utah to help with outreach via the No More Homeless Pets in Utah offices. The program has since been renamed Best Friends Animal Society–Utah, and this year we launched No-Kill Utah (NKUT) to help the entire state reach no-kill status.

City Weekly has been a keen supporter every step along the way. From making our programs a recipient of their charity events to numerous sponsorships of our own events, City Weekly is always there to help make a difference for pets and the people who love them.

“One of the greatest things about City Weekly is their comprehensive local event coverage,” says Jaimi Haig, marketing specialist for Best Friends Animal Society. “They fully support the Salt Lake community nonprofits and beyond. They engage the community on so many levels. Their festivals are vital to help bring people from all walks of life together. They provide a main source of advertising for the community too, and they give back at every chance they get.”

A great example of the synergy between City Weekly and Best Friends was City Weekly’s Beer Festival held last summer. City Weekly offered Best Friends the opportunity to have our volunteers in attendance during the festival in exchange for a portion of the profits. We supplied responsible and reliable folks to volunteer at their event, and they, in turn, helped us pay for more spay and neuter surgeries, provide more medical attention to sick or injured homeless pets, and pay for the resources required to house them until they are adopted out. This event exemplifies how collaboration is imperative to help Save Them All, even outside of the animal welfare arena.

“They’re a great source of news in Salt Lake, but they also bring so much more to the community,” says Jaimi. “We’re thrilled to have connected so strongly with their audience and get named Best Nonprofit of 2014. We look forward to partnering more with City Weekly now and far into the future. Salt Lake City is both of our ‘beats.’ ”

Learn more about what the Best Nonprofit of 2014 is up to this year. Click here.